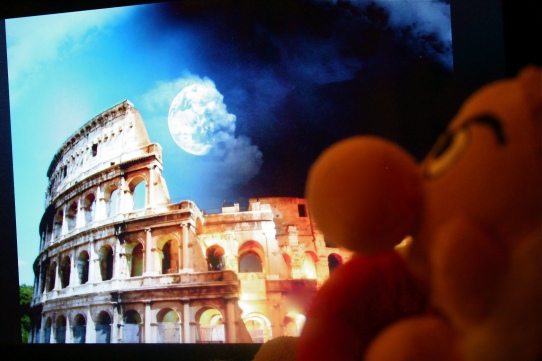 If the Roman aristocracy and clergy opulent feasts didn’t survive the proof of time, the Cucina Romana, traditional modern Roman Cuisine mostly developed during the Papal States Era, actually did.

Having roots in rural and family poor recipes, the Roman cuisine is also strongly influenced by foreign cultures, be them occasional invaders or permanent communities passing through the history of the Eternal City. Simple ingredients like local herbs, pulses, vegetables, few cheeses and cheap meat cuts , if not offal of butchered animals, make the most of this unique cuisine.

The people of Rome, suffering the outrageous Papal sovereignty, pitiless invaders and turmoils following the Italian unification, and used to make of nothing the most, never let themselves down and are renown for their wittiness and sarcasm with which they always tried to overcome difficulties and bad times. The way Rome lived, Rome actually ate.

From poor ingredients people easily developed a comfy, tasty and rich cuisine with popular dishes that are today served all over the world. During the Dolce Vita years Rome Osterias were home for actors such as Marcello Mastroianni, Audrey Hepburn, Sofia Loren, Charlton Heston and many others as that same rural poor dishes became increasingly popular among Hollywood stars. Today Rome is an historical landmark not just for its long history but also for its fine food and wine.

In our next supperclub, Chef has decided to start this brand new series of Italian regional cuisine inspired nights, coming back to his hometown culinary origins and giving our guests the more traditional recipes of his chidhood and creating some new recipes from that centuries old ingredients that made modern Roman cuisine so great. Courses will be Italian “assaggi” which translates something in between mains and tapas dishes.

And now, the menu!

Last month I discovered the Back Door Kitchen, an Italian duo formed by Roberto (the chef) and Fabio (the photographer) organizing themed supper clubs every month. Among their past events there have been Spanish Tapas dinners and Italian food and wine tastings.
Their next event was a Roman Supper Club; one quick look at the menu and I decided to book the ticket! Even though I was born in the “eternal city” and lived there for 25 years, I am not an expert of Roman cuisine, since my parents come from other parts of Italy so I grew up eating their traditional food. At £25 for a starter, two first courses, three second courses and one dessert, this supper club was a great deal that I simply couldn’t miss!
Three of my Italian friends decided to join so it became even more of an Italian night! Fabio, Roberto and Assunta (who has been helping out the Back Door Kitchen team for a few months) greeted us at the door with a complimentary glass of Prosecco.

We started with Carciofi alla Giudìa con crema Cacio e Pepe (deep-fried artichokes with a cream made from traditional Roman cheeses). The fried artichoke is one of the most famous dishes of the Roman Jewish cuisine, while “cacio e pepe” is traditionally a condiment for pasta made of Pecorino Romano cheese and black pepper. Roberto merged together the two recipes and added a “cacio e pepe” sauce to the artichokes, which worked out wonderfully.

We then tasted the 1st of the main courses – my favourite dish of the night – Gricia con cipolle caramellate. Roberto made the fettuccine and served them with “guanciale” (Roman pancetta), caramelised red onions and Pecorino Romano cheese. The pasta was cooked “al dente”, which is how the Romans like it! A simple dish without overpowering flavours: just a few good ingredients that work perfectly together.
The 2nd pasta was Gnocchi alla Carbonara di Zucchine (homemade potato and flour gnocchi with a courgette carbonara sauce and saffron). Again, carbonara is a typical dish of the Roman cuisine, which Roberto has re-invented with courgettes (replacing pancetta) and a hint of saffron. I was very impressed that he made the gnocchi, something I’ve only ever seen my grandma doing! Roberto’s gnocchi were big and he makes them this way to hold the cooking better and remain thick (and they don’t crumble in the boiling water).
Italian lunches have several courses and can go on for 4-5 hours, something that fills my Indian fiancé with dread every time! The Back Door Kitchen supper club was true to traditions and lasted more than 4 hours! This is because Roberto cooked everything on the night, to ensure the food was well cooked and hot. As the supper club started at 20:30, we only finished eating after midnight, with some of the guests having to leave for fear of missing the last train home.

As a second course, we had three tastings: Saltimbocca alla Romana; Seppioline ripiene di broccoli ripassati e crema al nero di seppia; Baccalà con crema di ceci, rosmarino e pancetta.
The “saltimbocca alla Romana” are chicken breasts cooked in a white wine sauce with Italian cured ham, mature cheddar and sage. They were my second favourite of the night: the ham wrapped around the chicken makes it very tasty, while the white wine, cheese and sage add extra flavours.
The second tasting was char-grilled squid stuffed with broccoli sautéed with garlic and chilli and a sprinkle of homemade squid ink sauce on top. I don’t like squid very much, but this combination which broccoli cooked with garlic and chilli, which I love, worked well.
Another original and successful pairing was the salted cod with chickpea cream, rosemary emulsion, crispy pancetta and toasted bread. it made you want to dip the bread into the cream (aka. fare la scarpetta)!

As usual, I am not satisfied until I eat the dessert, so I was very happy when finally the time came to taste the Crostata con marmellata di arance e limoni, a tart of homemade orange and lemon marmalade. Sweet and sour flavours combined with a buttery and crunchy base, it was so good I helped myself to a second slice!

Such a long and filling meal called for espresso, never mind that it was almost 1am! A good caffè (and ammazzacaffè) is required at the end of a good dinner. And anyway, I needed it to stay awake during the long journey home on London’s night buses! It was a late night, but it was so worth it! I had amazing food, made new friends and, for one night, lived a true Roman experience!

ps: if you are vegetarian, email the Backdoor Kitchen in advance to see if they can prepare a special menu for you!

Add your blog review of The Regional Cuisines Series - Rome